There is nothing so great as the Eucharist. If God had something more precious, He would have given it to us. 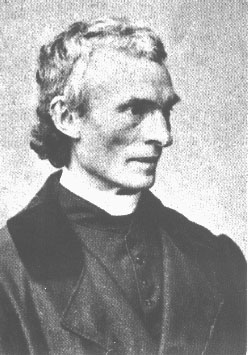 1. When was St. Peter Julian born?

a. Disciples of Jesus

b. Priests of our Lady of Guadalupe

c. the Priests of the Blessed Sacrament

d. Servants of the Sacred Heart

3. St. Peter Julian was friends with which other saint?

O unvanquished martyr of the faith, Saint Tarcisius, who was inflamed with the most intense affection for the Holy Eucharist and enjoyed the happiness of dying united to Jesus in the Eucharistic, we beseech you to ask Our Lord that our hearts may be filled with a love like yours when receive Him into our hearts in the Eucharist and above all that in the final moments of our lives we will be so united with Him that we may enter into blessed eternity. Amen

The Eucharist is the supreme proof of the love of Jesus. After this, there is nothing more but Heaven itself.